It is better to manufacture an emergency luminaire that is invisible to the eye than produce a nice one or one that is noticeable. As designers and manufacturers of emergency lighting, we cannot deny that these appliances are secondary in the visual conception of a building, in a way that the architect does not think of them whenever he envisages the site.

The best emergency luminaires are those which go unnoticed.

However, they are important at a technical level so, even if they play a minor role, they are something we need to consider even to a greater extent than conventional lighting, as this can be installed wherever we wish to, depending on the environment it is settled in. In contrast, emergency lighting must be installed following regulations, which is why a striking emergency luminaire can ruin the whole architectural design.

Fortunately, technological advances in the last decades have allowed minimizing the size of the components that integrate the luminaire, which is a key factor in emergency lighting. Conventional luminaires only require a lamp and a wire that provides them with the necessary power, depending their ornamental components on the designer´s imagination. However, emergency luminaires cannot work without batteries or electronic cards.

This whole package that self-contained luminaires need to contain (in centralized fittings there is more scope of freedom) obliged to create big appliances in the past, like the ones shown in the image below.

In the last few years, a succession of technological improvements that have allowed to progressively reduce the size of the luminaires have taken place. These improvements have happened especially in two fields:

Light source: The evolution from the first incandescent to fluorescent and compact fluorescent light bulbs afterwards, to eventually LED light sources has permitted not only to reduce the size of the lamp, but also to improve its performance. This has had its impact on the batteries because less power is needed to achieve the same duration.

Batteries: the evolution followed the following sequence: NiCd > NiMH > LiFeP04. In this field, the most significant advances have taken place in the loading method and in the reduction of their environmental impact.

Thanks to this progress it has been possible to create new emergency luminaires with different shapes that allow them to camouflage within any environment. The most striking example is the Block luminaire by Daisalux. Thanks to its flat format, rectangular and discreet shape, and its 3 cm of thickness, it is perfect for installation on the surface of a wall. It is available in three colours (white, black and metallic grey) which make it almost invisible in walls painted in those colours. Nevertheless, one of its most attractive features is that you can add a completely customizable housing, thanks to which the luminaire can be perfectly camouflaged. An example of the impressive result achieved can be seen at the Foster’s Hollywood in Valladolid (Spain).

Can you find it without help? 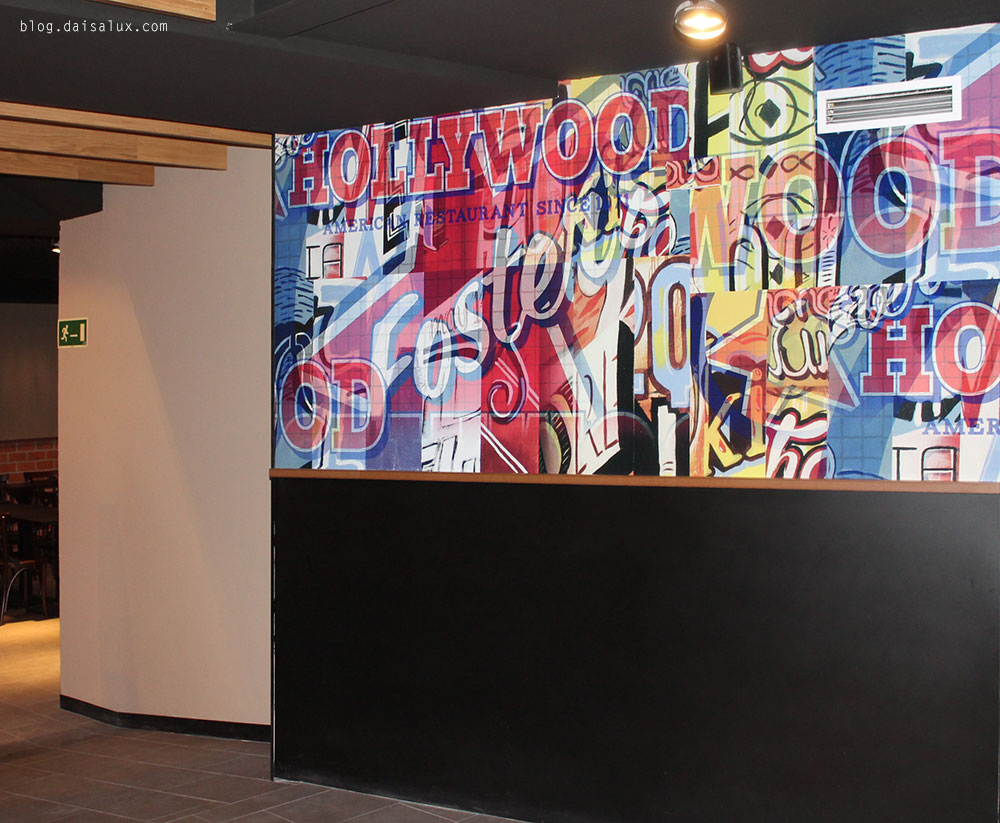 Here you can see it more clearly:

To these technological improvements, we need to add the technical advances that have allowed installing these fittings onto the wall and ceiling, so that they can be recessed mounted, and no prominent volume is perceived. This allowed us to come up with interesting solutions in appliances like the Lens, Hydra, Nova, Norma or Sol in the past. But it has reached its maximum expression with the Izar luminaire, by Daisalux.

Let us summarize the genius of the Izar in three aspects:

In the video below you can see, without any difficulty, how easy it is to install the Izar luminaire and what little space it takes up, together with the basis for the activation of the Eco-Permanent function:

Distance between luminaires of up to 17 meters

Although we have dedicated this post to the size of the luminaires, we cannot finish it off without mentioning one of the most important factors in the design of emergency lighting: the optics. Since we have already delved into this subject in a previous post, we are not going to do it again, but we would like to recall that the development of new lenses allows manipulating the light at our will. In the Izar we can find two different lenses: one for open area and another one for escape route illumination, which allows a distance of almost 17 meters between luminaires at a height of 2,70m of  placement.

We finish the post with some pictures of the San Agustin Market (Toledo), where the Izar luminaire has been installed between wooden slats (Blocks and Vir were also installed). In addition to that, this Izar features a solution in black colour, so it can be camouflaged within a ceiling painted in that colour. 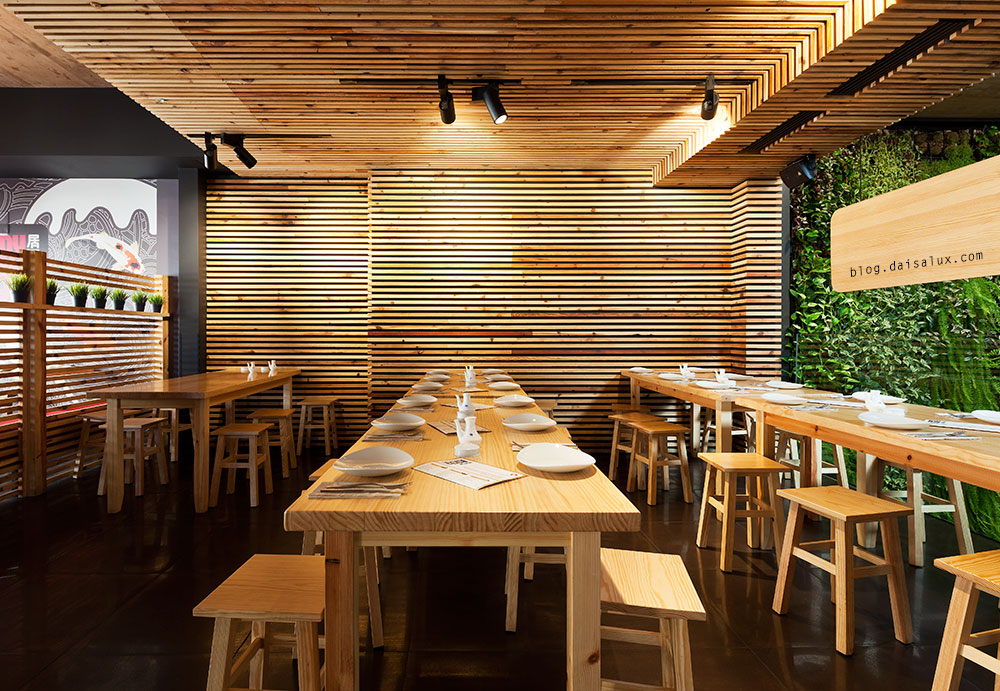 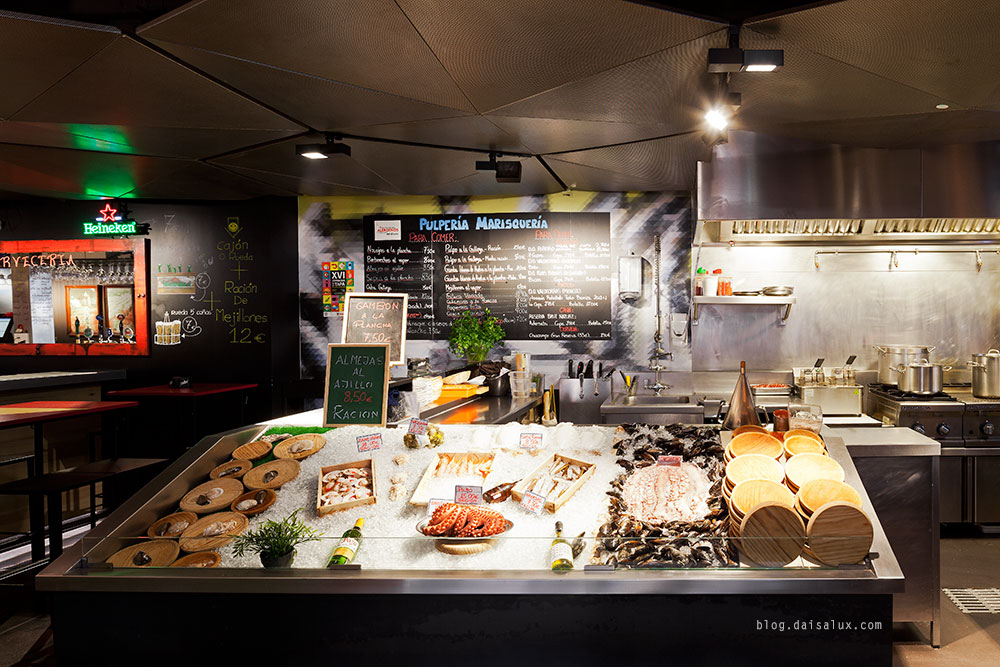 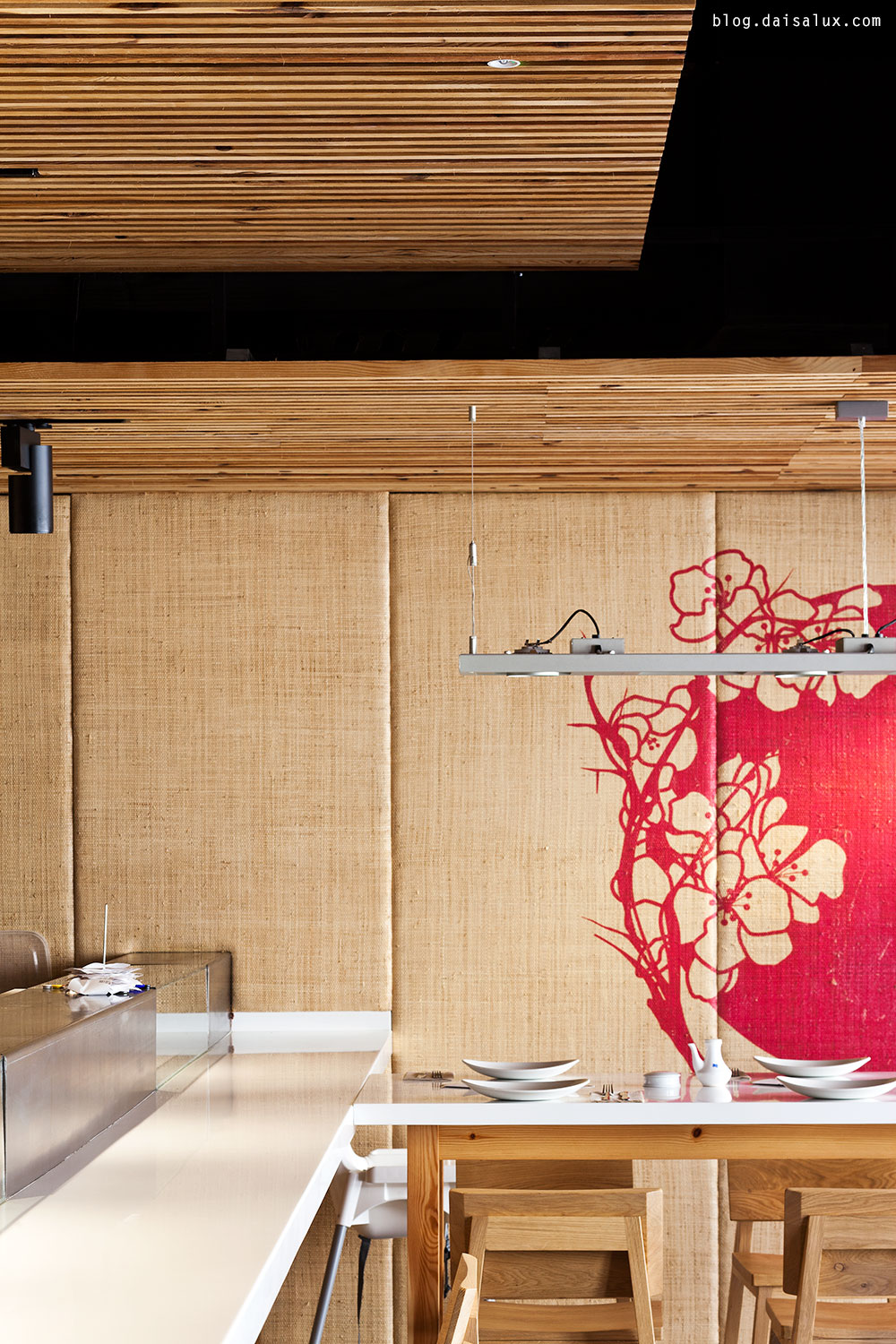 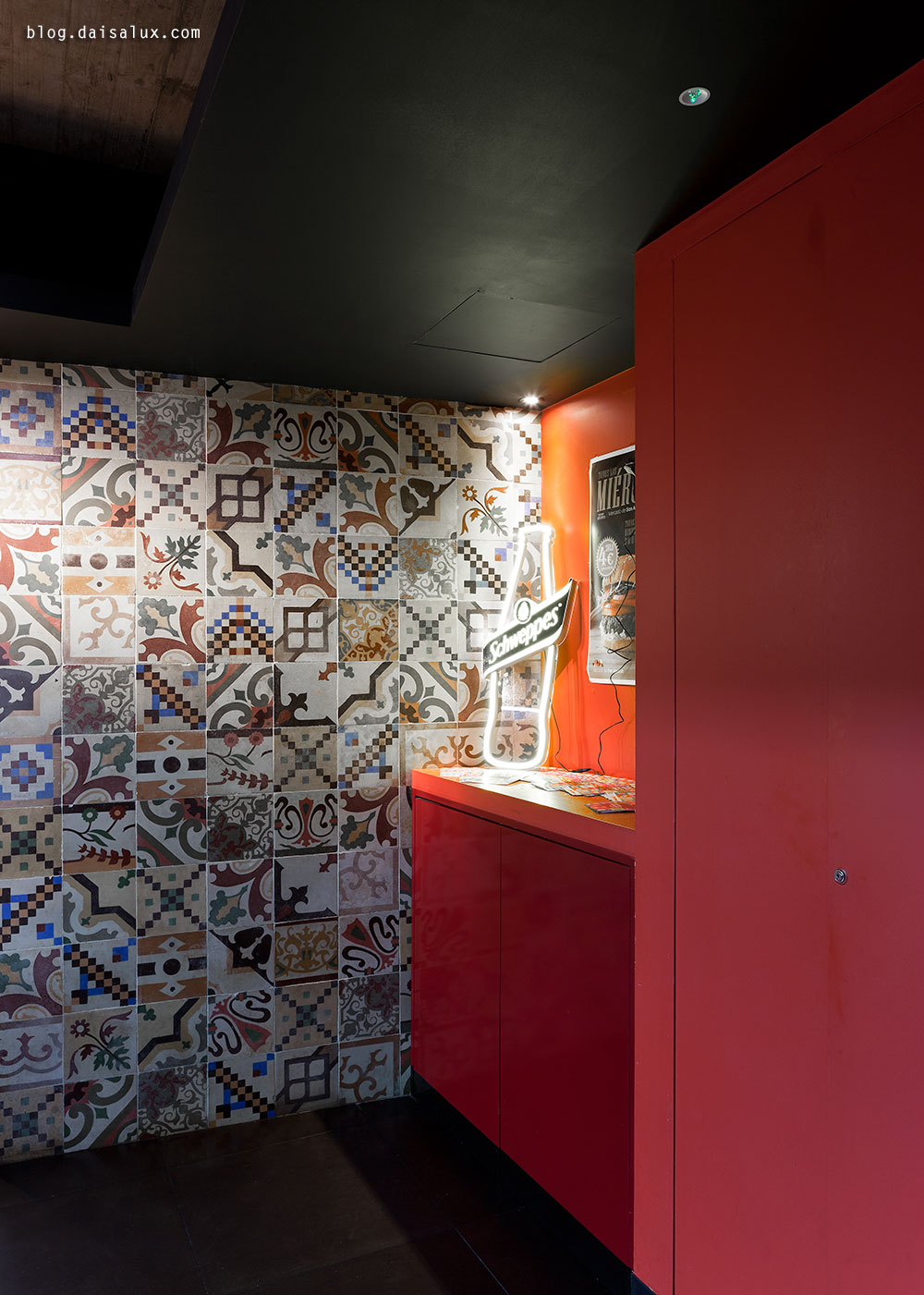 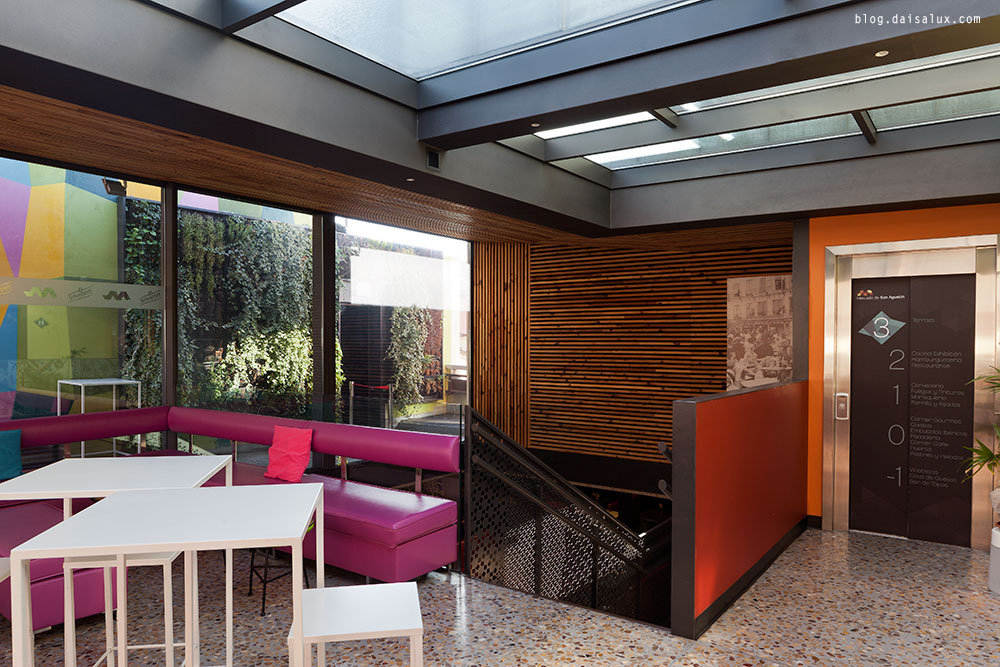